This week in Hamilton was the New Zealand Blind Bowls.

Canterbury were fortunate enough to have two Blind Bowlers attend this event; Deane Robertson and Tom Boyd both from Burnside Bowling Club.

Hosted by the Frankton Junction Bowling Club over the week bowlers and their guides participated in Singles and Pairs.

Dean and Tom were both in the B2 category and we are very proud to report Tom was runner up in the B2 Singles.

Pictured below is Tom and his Guide Chris Iggo; also from the Burnside Bowling Club: 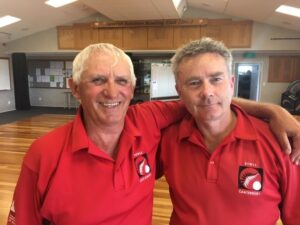 Below Deane takes a seat in between games with Bowls NZ newest Life Member; Ann Muir. 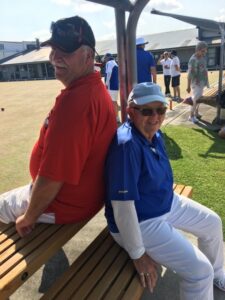 Congratulations guys and thank you for representing Bowls Canterbury once again.

The B1 Singels final was played out between the perennial winner, Tauranga’s David Monk (Sue Ashton Director) and Auckland’s Glenn Hanneman (Director). In their qualifying round in the morning Hanneman had led comfortably all the way to win by 18-12. In the final Monk got out to leads of 13-6, 15-9 and 17-11. At that stage Yeo gave Hanneman a bit of a “team talk”. Whatever he said must have been profound because Hanneman tenaciously fought back to win by 21-18. This match took three hours and twenty minutes and was a wonderful display.

The B2 Singles Championship started the day with six players still in with chances to take the title. A great day of competition saw Browns Bay player, Gerald Brouwers (Bill Easton Director) finish unbeaten with six wins. This was a formidable effort in a tough field. The runner up was Burnside’s Tom Boyd (Chris Iggo Director).

The final of the B3 Singles competition was unfortunately a win by default as one player left the excellent Frankton Junction facilities not realising he still had a final to play. The battle was going to be between Sue Curran (Anne Muir Director) and Don Clark (Ray Director). However Clark left the facilities to enjoy Hamilton and Curran won by default. This was a shame because in their section play match Clark had won by 20-19 and a potentially intriguing final did not eventuate.

The B4 Singles  final was an another stellar match. In section play, Milford’s Heather Smale (Hillary Ross Director) had beaten Stoke’s Steve Delaney (His father, Colin Delaney Director) 15-14. With both players playing outstanding bowls Delaney led all the way to become Champion by 21-16.

The B1/2 Pairs winners were Nelson’s Gordon Oldfield (Roydon James Director ) playing with David Monk (Sue Ashton (Director). This was a special win for Oldfield and Monk as the dedicated it to Monk’s twin brother John who had to withdraw from the tournament on Tuesday with cardiac health issues. John is comfortable In Waikato Hospital waiting for imminent heart surgery. The runners up in the B1/2 pairs were Browns Bay’s Joseph Kim (Margaret Davies Director) playing with Counties Parveen Shankar (Glenn Newton Director ).

Thank you also to Kevin Smith for providing us with updates from the Tournament.