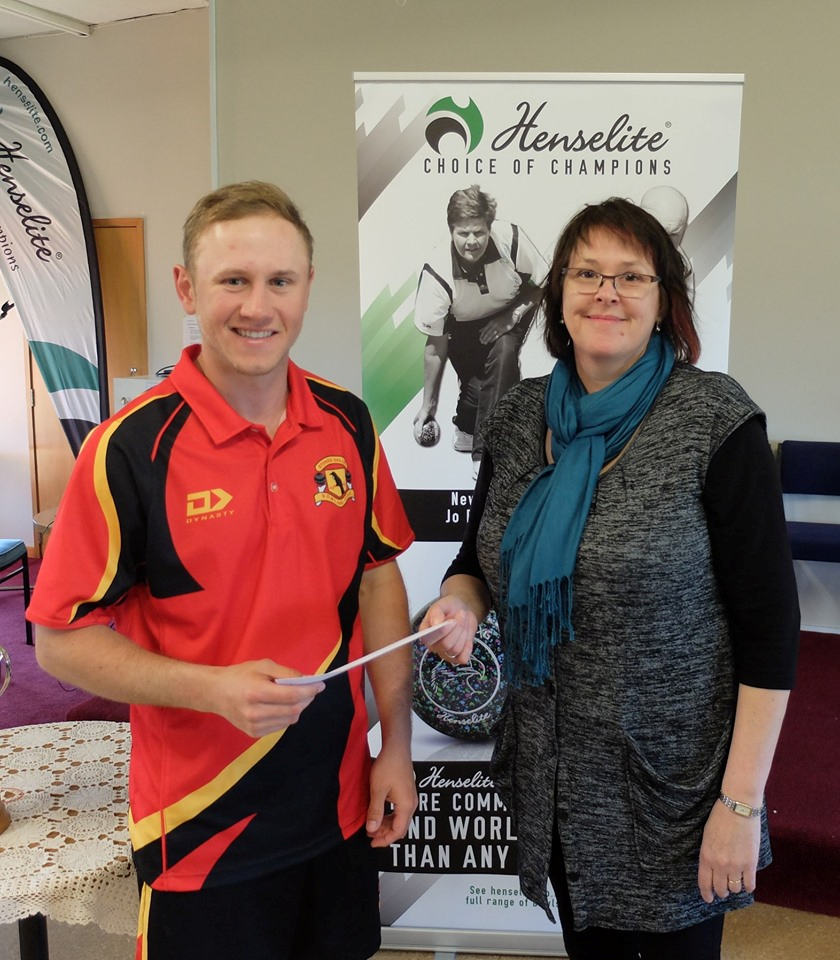 Canterbury’s spring weather was not kind to the Burnside Under 26 Singles Championship last weekend (4-6 October) but despite this the standard of play reflected the excellent calibre of the 32 strong field.

Friday’s conditions were cool but clear overhead and four rounds of 21 up singles were programmed. Saturday’s dire weather forecast raised concerns for the organisers and after consulting the players a fifth game was completed late in the day. This meant that many players delivered over 400 bowls on Friday. Saturday’s cold, wind and rain showed the wisdom of this decision. Round 6 was completed in very heavy rain necessitating a break of almost three hours before the final section play games were played in the afternoon. The saving grace was that the greens stood up well in the conditions to give a true line to the jack. The field was then divided into four divisions for post section play and the last game of the day was the quarter-final knock-out round for these divisions.

Section 1 had three 5/7 game winners with Bradley Down (Stokes Valley) and Caleb Hope (Gore) advancing to Division 1 ahead of Tayla Bruce (Burnside) on a count back. Seamus Curtin (Stokes Valley) 6/7, and Daryl Read (Takapuna) 5/7 topped Section 2 and Section 3’s Sheldon Bagrie-Howley (Gore) and Aidan Zittersteijn (Paritutu) both with 6/7 wins, all won a place in Division 1. The only unbeaten player in section play, Stokes Valley’s Finbar McGuigan 7/7 and Taylor Horn (Mangere) 5/7 were successful in Section 4. The unlucky player here was Burnside’s Richard Hocking who also won 5/7 games but like Bruce, was third on a count back and was relegated to Division 2.

With an all male Division 1 a casual observer might think that the young women in the field were not successful. Not so! Round 6 in section play in the harshest conditions of the weekend saw Nicole Toomey (Victoria), Selina Goddard (Takapuna), Tayla Bruce (Burnside) and Cait Bassett (Burnside) have wins over Seamus Curtin, Taylor Horn, Caleb Hope and Jesse Russell respectively. These four women won 16 games between them in section play alone!

Division 1 quarterfinals resulted in wins to Finbar McGuigan, Aidan Zittersteijn, Seamus Curtin and Sheldon Bagrie-Howley over Caleb Hope, Bradley Down, Taylor Horn and Daryl Read respectively. At the end of play on Saturday semi-finalists in all four divisions had been found.

Sunday dawned clear with blue skies and a nip in the air. McGuigan defeated impressive first timer at the tournament Aidan Zittersteijn 21-16 in a close game featuring some excellent shot making. In the other semi final Curtin won 21-10 against Bagrie-Howley in a virtual rerun of the 2018 final where Curtin had also been successful.

The Championship Final was the 140th game of the weekend and was played between two great friends both from the Stokes Valley Club, Lower Hutt. Last year Seamus Curtin defeated Finbar McGuigan 21-20 in a brilliant quarter-final match so this contest was one to savour. Both players first entered in this event as 15 year olds from Plimmerton – now both 19, Curtin is a Blackjack while McGuigan has graced the NZ Development team. Their play demonstrated their high standing in NZ’s bowling circles. Curtin with excellent draw play led 7-5 after 9 ends but McGuigan always stayed in touch and 3 ends later after 6 unanswered shots took the lead 11-7. The pair shared shots during the next 6 completed ends with pin point draw play and attacking run shots and drives with McGuigan ahead after the 18th end 15-11. From this point, with both players continuously changing the situation on the head, McGuigan played superbly to lead 20-13 after 23 ends. On what proved to be the final end Curtin held two shots right on the jack, McGuigan ran at the head spilling the jack to the ditch and held two shots. Curtin’s attempt to save the match failed and Finbar McGuigan was a very worthy winner of the Burnside Under 26 Singles title over an equally worthy runner up.

Nineteen year old Finbar McGuigan, who works for a sports field building firm and studies part-time courses offered by the NZ Sports Turf Institute, attended Aotea College with his great mate Seamus Curtin. He won 10 games straight to win this event – a rare achievement. He partly attributes his recent success with a change of bowls to Henselite Dreamline XG so look out for Finbar on Canterbury greens in January at the Summerset National Singles and Pairs Championships. He will also be seen on TV next month in the Stokes Valley Vipers 3Bowls5 team.  Seamus Curtin’s bowling future is assured for some time in that next month he will represent NZ at the Hong Kong International Classic and then again in December at the 2019 World Junior under 25 Championships in Newcastle, England.

These two players are eligible to play at this tournament for another six years!

Meanwhile on the adjoining rink Burnside’s Richard Hocking and Victoria’s Nicole Toomey were engrossed in the Division 2 Final. This was a very good game with Hocking’s drawing skill and all round play proving too much on this occasion for Toomey who had played excellent bowls throughout the tournament.

Local players had mixed results but added much interest to the event. Burnside’s Tayla Bruce and Richard Hocking narrowly missed gaining a place in the top division on count backs, with Hocking who won 8/10 games going on to win Division 2. Cait Bassett (Burnside), and Elmwood Park’s Mat Bassett and Liam Eathorne each won 4 games  in very competitive sections while first-time players at this event, Braeden Casware (Cashmere) and Dylan Campbell (Woolston Park) played some very good bowls and will have learnt a lot from their experiences. Both can look forward to future events with confidence.

This tournament provided an excellent opportunity for the five players representing NZ on the Gold Coast in November to hone their playing skills in a very tight and competitive environment. Black jacks Selina Goddard and Tayla Bruce will play in a Multi Nations tournament before they meet Australia in the 2019 Trans-Tasman three-test series the following week. Sheldon Bagrie-Howley, Caleb Hope and Taylor Horn are in the five-man NZ Development team to play Australia’s Men’s Development squad in a three-test series at Broadbeach. All five players will have gained confidence from their play during the Under 26 event.

Results for all section and post-section games, final player placings and photos can be found at www.burnsidebowlingclub.com